Over the last few weeks, I’ve been getting to grips with the Mountain Makalu 67 gaming mouse. You may be familiar with the brand after they released the Everest keyboard but today we are looking at this ergonomic, right-handed gaming mouse. The big talking point on the Makalu 67 around release was its inclusion of the all-new PAW 3370 sensor and it is one of the few mice on the market that gives gamers with larger hands a lightweight option.

Along with the top optical sensor, the mouse features a comfortable ergonomic shape, somewhat similar to the likes of the Zowie EC1 and Razer Deathadder but slightly wider, filling your palm. This mouse is definitely designed towards palm, claw, and hybrid grip players as the hump is too prominent for a consistent fingertip style.

The design and specifications are great, so let’s take a closer look and see what the Makalu 67 can do. 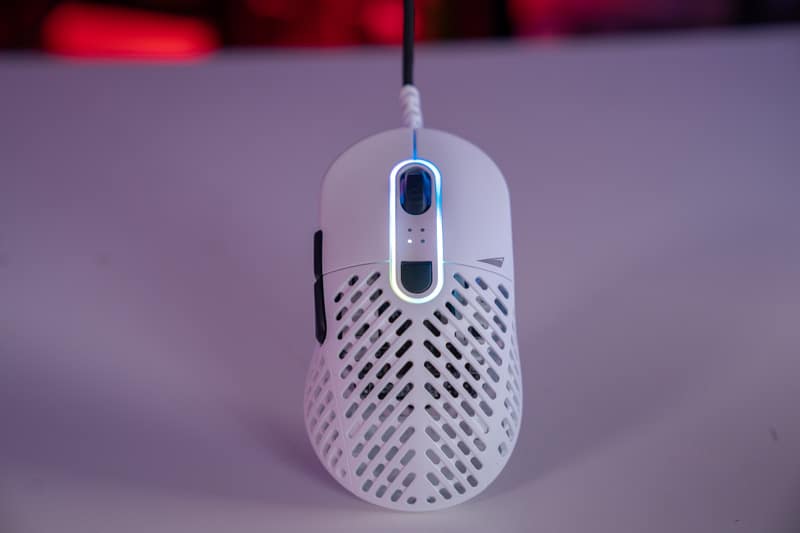 What’s In the Box

Usually, talking about the packaging is a waste of time but I have to say, for such an affordable mouse, the box, general packaging, and the little extras is a premium touch. The flip-open box uses magnets and reveals the mouse encased in foam. Stuck to the back of the lid is a little note from the founder, with the quick start guide tucked behind. 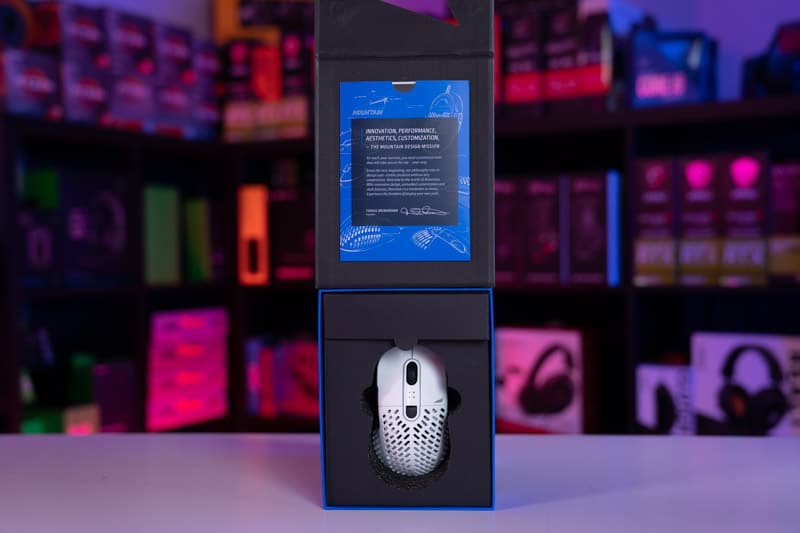 Straight away you are going to notice Mountain has gone with something a little different than your normal honeycomb lightweight mice, with the perforation on this being more like rounded off rectangles. The Makalu 67 looks great, with the crisp white shell contrasting nicely with the black side buttons and mouse wheel.

There is a touch of RGB in the form of a ring that goes around your DPI switch and middle mouse button. The lighting is diffused and can be changed in the software but it would have been nice to see some diffused lighting illuminating the shell’s interior as this is something I quite like with perforated mice. 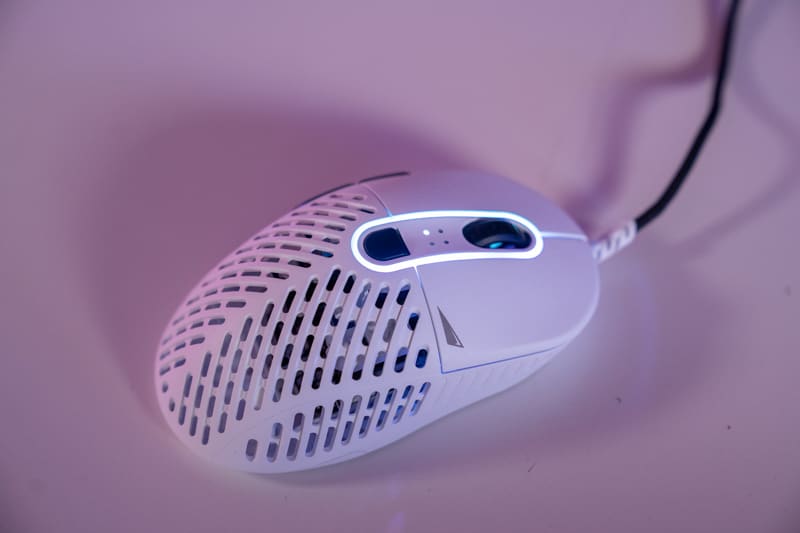 As previously mentioned, the large size of the mouse is noticeable straight away and you can clearly see this is not designed for smaller hands. I mostly play with a palm and occasionally hybrid claw grip, which works perfectly with this mouse. I have been testing lightweight mice for some time now and even converted from a bulky 100-gram mouse down to a 50 gram not that long ago, so the weight (57 grams) caused no issues. However, the mice I have been using are quite small in comparison so it did take my grip a bit of time to adjust to this shape. 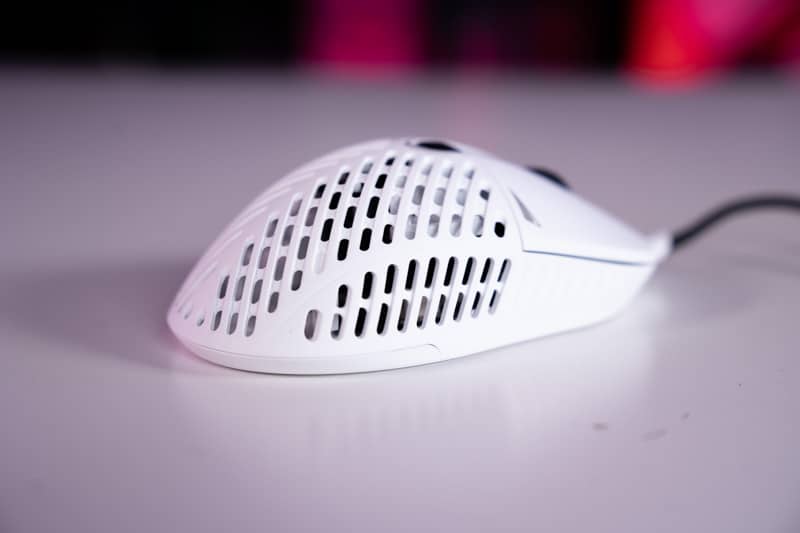 The Makalu 67 is 126mm from front to back, 62mm across at the front and the rear flares out slightly making it 70mm in width. The grip width sits at 58mm thanks to those indentations and at the peak of the hump the mouse measures at 43mm. The mouse slopes down towards the primary buttons, with a height of just 15mm. 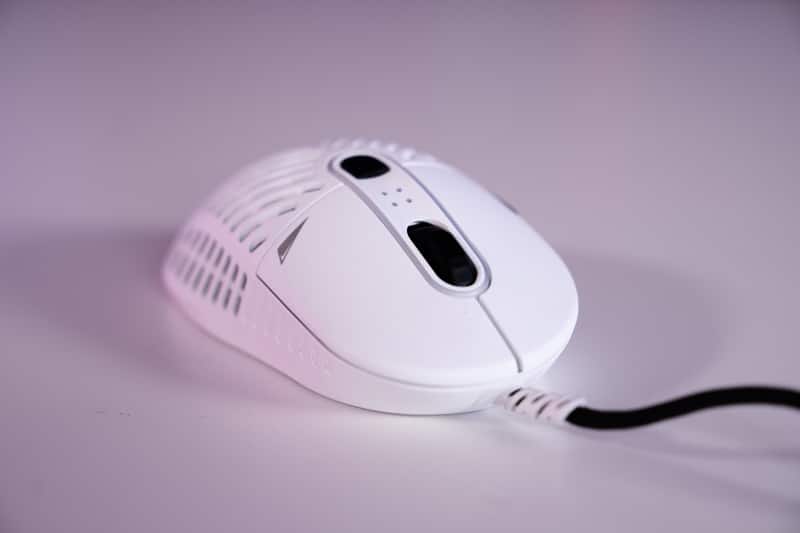 The large size reminds me of the Zowie EC1 or Razer Deathadder most but this is definitely a bit bulkier towards the back and if I’m honest, felt slightly less comfortable but not enough to stop me from using it.

It isn’t just the size of the Makalu 67 that reminds me of the Zowie EC or Razer DeathAdder, it is the shape too. The ergonomic shape makes the mouse feel like it naturally sits in my right hand and that is something I tend to enjoy. Aside from the early teething issues of getting used to larger mice again, the shape remained comfortable throughout use. The mouse slopes at the rear quite aggressively, with the front being a more gentle slope down to the primary buttons. There are no grooves in the triggers, which isn’t a major thing but is certainly something I favor when it comes to comfort. 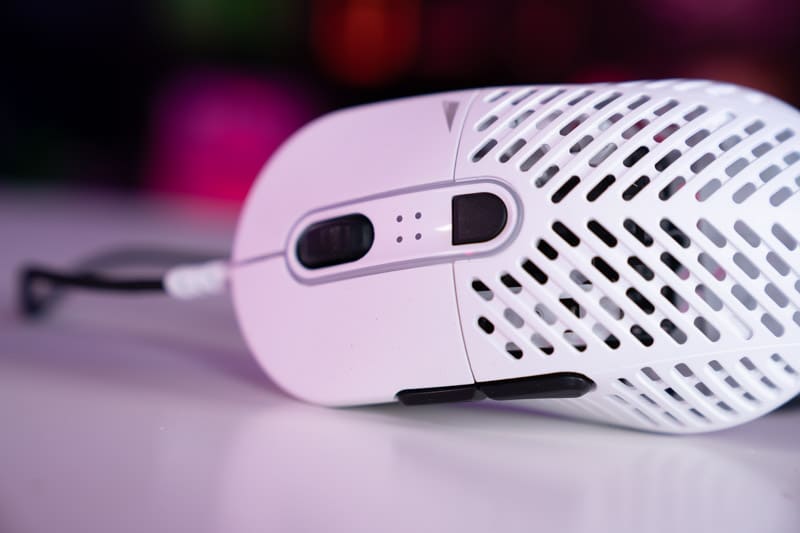 I have very few issues with this mouse but if there is anything I would add it is going to be grip. The texture is a matte smooth ABS plastic in what Mountain calls their “Ribcage” design and you barely even notice the perforation when gaming. The sides feature slight grooves for grip and they work well enough but if you get sweaty palms/ fingers, you may struggle to use this over long periods of time as there just isn’t enough for your fingertips to grab on to. It’s a strange one because even though I didn’t lose grip while testing, sometimes I felt like I never had complete control.

The buttons on the Makalu 67 are one of its strengths, with minimal pre and post-travel on the main triggers. The primary buttons are very responsive and are probably my favorite aspect of the mouse, making general FPS play feel snappy. Beneath the primary buttons sits Omron switches rated for 50 million clicks. Nothing crazy to talk about with these switches as I’m sure most of you have owned a mouse with these before but if not, they remain reliable for a very long time and the noise is somewhat satisfying. 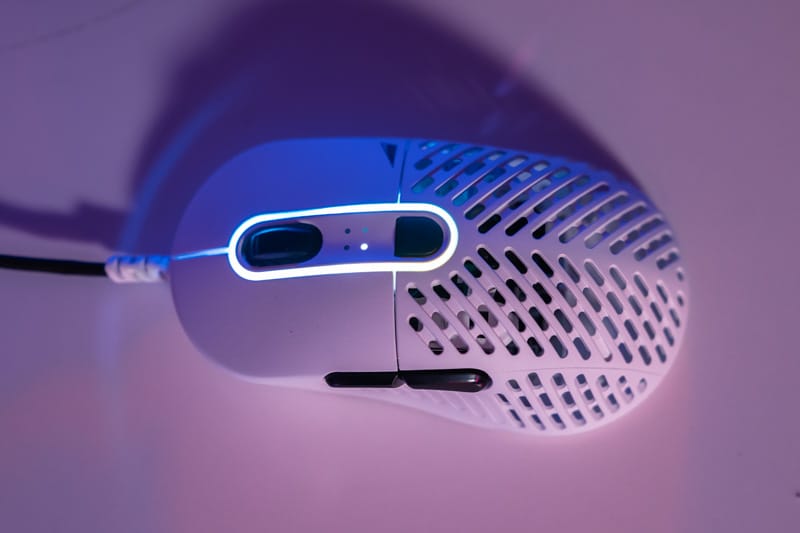 The DPI switch is quite a large black one but thanks to the concave section it sits in you are never going to accidentally press this. There are LEDs to indicate which profile you’re on but unless you are familiar with mice you are going to need to go into the software to see what the exact increments are. While there are only four LEDs, the mouse has five incremental steps, which means when there are no LEDs on you are likely using the mouse in 400 DPI. Of course, when using the software you can alter the DPI levels and save them but most will be fine with the default settings.

The middle mouse button feels lower profile than most mice and appears slightly slimmer than most too but this may just be because the mouse is quite large. The wheel works well and makes accurate scrolling a breeze with a tactile bump indicating every slight scroll. Compared to other mice, I found the middle mouse button much easier to click in-game without accidentally scrolling during the process. This is something with other mice that lead to me rarely using the middle button but I feel confident enough with the Makalu 67 to utilize this more.

Is it the best mouse wheel ever? No, but it is solid, especially for gaming.

The standard of mice cables has gone through the roof over the last year or so, with almost every manufacturer being sure to include a lightweight, flexible cable. This paracord style cable is superb and works well both in and out of a mouse bungee but I’d always recommend you use a bungee with any wired mouse. The cable housing is flexible rubber and thanks to its slight upward angle of around 5%, the mouse truly does feel wireless at times. 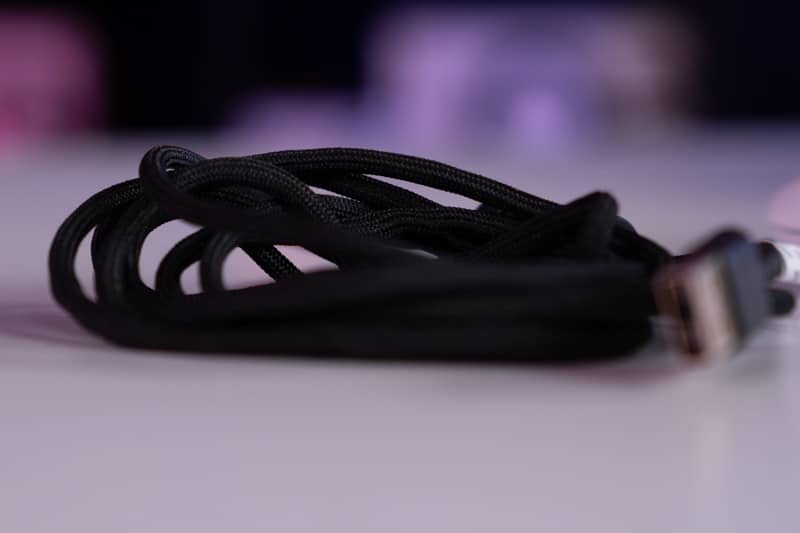 The braided cable is 1.82m in length and is another solid feature of the mouse but it will attract dust quite easily. Dust on my mouse cable doesn’t really concern me though and the functionality makes it all worthwhile.

The sensor on the Makalu 67 made it a bit of a market leader at the time of release as it was the first gaming mouse to feature Pixart’s latest PAW 3370. You aren’t going to notice any difference between this and the 3389 but on paper, the 3370 is better, with a lower error rate and higher DPI, while also being more efficient. 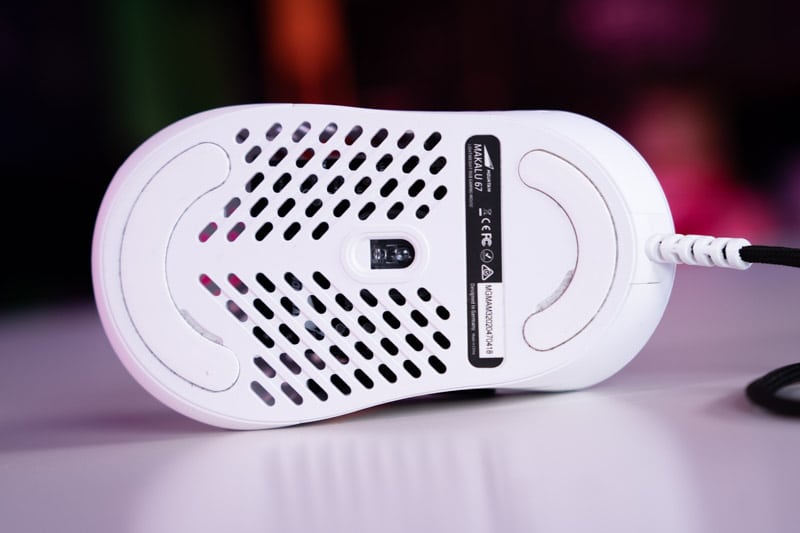 We live in a world now where it is actually quite hard to find a gaming mouse with a poor sensor. The sensor featured in the Makalu 67 remained accurate throughout my testing and as an arm aimer, I tend to come across a few issues with mice. Not with this though, no matter how fast I swiped this across the desk I never once noticed any tilt slam or deviations, it’s great.

The overall performance is bolstered by the two large 100% PTFE feet underneath. There are two skates/feet in total pretty much covering the width of the mouse. When I find a gaming mouse I like I tend to stick with it for years only to eventually buy a new one when the feet have completely vanished. Well, Mountain has included spares and this is something I love to see from mice manufacturers. The skates feel completely smooth from the get-go, not something all mice can boast, and this really does glide effortlessly on my desk pad, making it a joy for both gaming and general use.

Lightweight gaming mice of this size are rare so Mountain certainly has a leg up on the competition in that regard. There is little to compare this to but if you are familiar with the Zowie EC1 or Razer Deathadder size and shapes you are going to be able to get used to the Makalu 67 fairly quickly. The cable and switches aren’t quite as good as the Razer Deathadder V2, however, it is much lighter and features smoother feet, with a better sensor.

The accuracy of the sensor, the flexible lightweight cable, and responsive switches make this a joy to use and while the perforated shell may not be for everyone, you barely notice it while playing, which is possibly down to this “ribcage” design.

All-in-all, we have another great optical mouse here to add to the list and it comes with a few other nice little features, which when you factor in the price, makes this an absolute bargain.

The accuracy of the sensor, the flexible lightweight cable, and responsive switches make this a joy to use and while the perforated shell may not be for everyone, this is a great mouse. There is little to compare this to but if you are familiar with the Zowie EC1 or Razer Deathadder size and shapes you are going to be able to get used to the Makalu 67 fairly quickly. 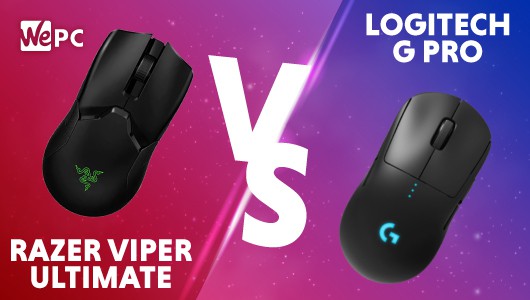 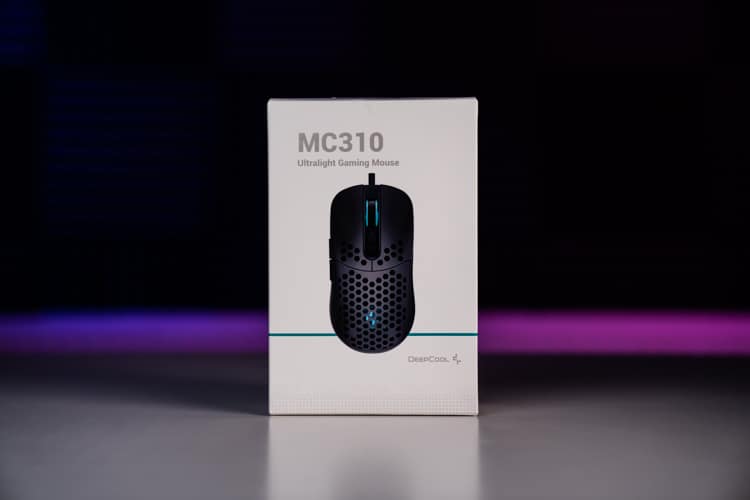 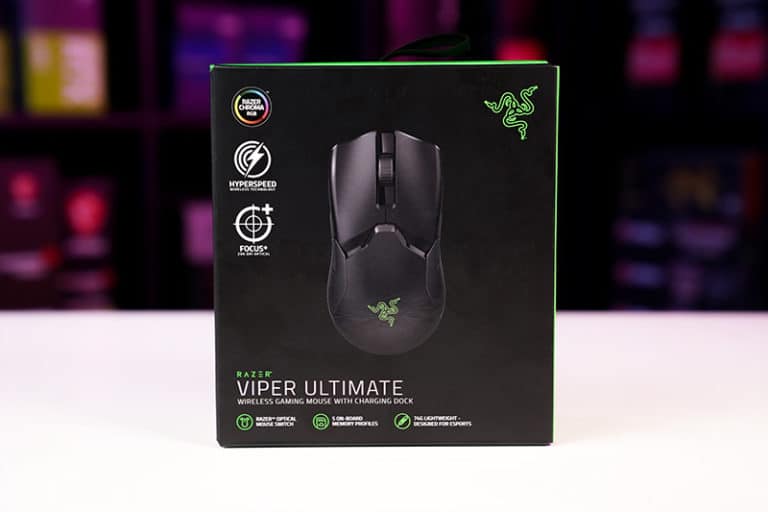 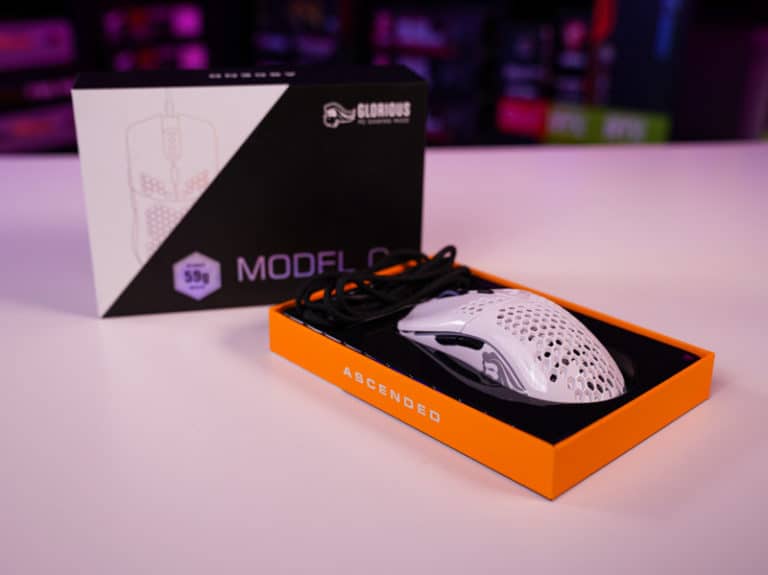