What's The Difference Between CPU FAN And CPU OPT? We Explain 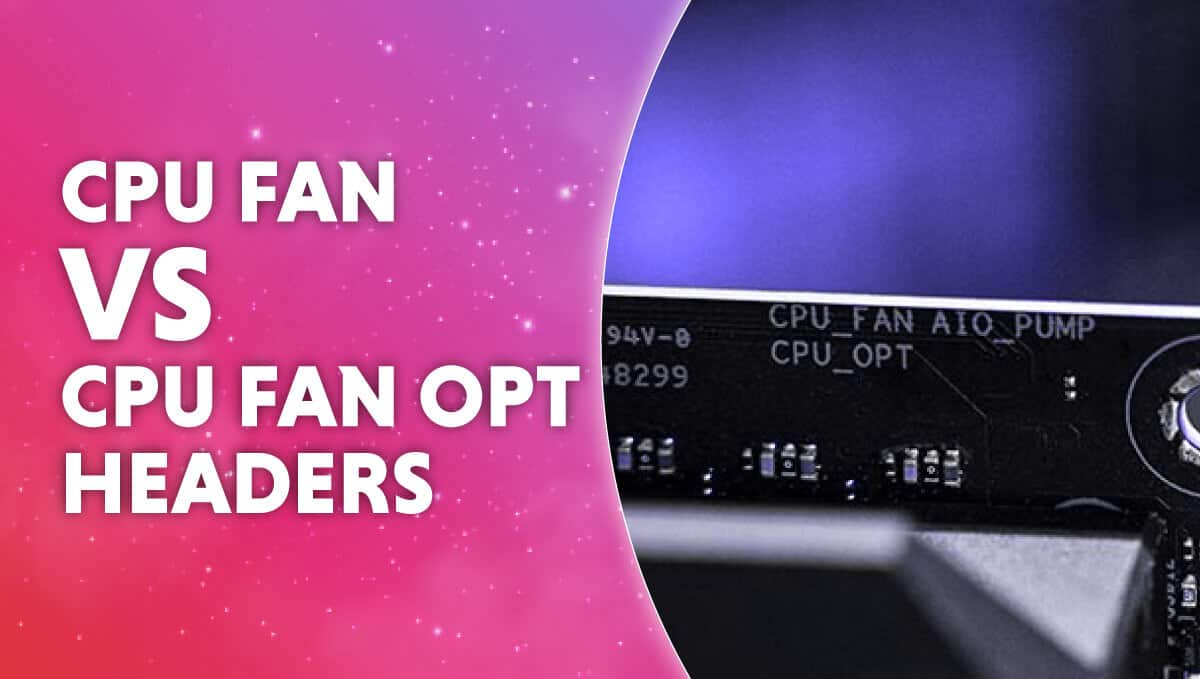 Knowing the difference between CPU_FAN and CPU_OPT fan headers on your motherboard is a small but crucial chunk of knowledge that you will need when building your own PC. Below we explain the function of both CPU OPT and CPU FAN headers and which one is best for certain scenarios, as well as give you some additional information on alternative headers on your motherboard.

What is a fan header?

Headers on a motherboard are rows of pins that form the ‘male’ (male connectors have exposed pins) half of a power connection, onto which cables with the female connector counterpart can attach. Fan headers, unsurprisingly, are typically used to power fan cooling systems inside your computer, although they can also be used to power water cooling systems as well. They’re essentially just small 12V power connectors designed originally for fans, only now they have a variety of uses.

What is a CPU FAN header?

The CPU_FAN header (as labelled on your motherboard) is the primary header on a motherboard.

As the name suggests, the CPU FAN header is the header your motherboard wants you to connect your CPU fan too, but why? Despite this, it’s not all that important you follow this rule, you do still need to plug in your CPU fan you just don’t have to do it there.

The only real distinguishing feature between the CPU fan header and the other fan headers is that the CPU fan has an inbuilt failsafe to protect your CPU from damage, if there’s no fan plugged into the CPU fan header then the computer will not boot. Instead, your PC will throw an error after POST, the error will read something like this:

Similarly, if your PC is already running when the connection to the CPU fan header is severed either by fault or intentionally, the PC will shut itself down.

Almost all CPU FAN headers are 4-pin, meaning that the speed of the fan can be controlled by the BIOS, Operating System, or desktop software suite. This means the computer has full control of the fan and can ramp up the speed automatically when the PC detects the CPU getting a little toasty.

Do you really need to use the CPU fan header?

The short answer is yes, of course, you must connect your CPU fan to a fan header unless you want your CPU literally melting in its socket. the longer answer, however, is no. This “CPU fan error” function can be disabled in the BIOS and you can technically use whatever fan header you want, this does come with downsides.

As we mentioned before, there are advantages to using the CPU fan header. These advantages come in the form of real-time temperature data being fed to the system in order to automatically adjust the speed of the fan, this equates to better cooling exactly when you need it. Ever notice your PC gets louder as it gets hotter? You have this function to thank for that.

The CPU_OPT header (CPU Optional) is a secondary power header which can provide an additional source of power for larger CPU heatsinks that may require multiple fans, or alternatively can be used to power AIO/liquid cooling systems, as pumps usually require a connection to the motherboard in addition to power from the PSU.

Again most CPU OPT headers are 4-pin, so can control voltage and fan speed in response to data on the CPU temp.

For everything else which is not a CPU cooling system, that does not need to be able to automatically respond to measured changes in the CPU temperature. SYS FAN (System Fan) or CHA FAN (Chassis Fan) are used mainly for the 12V power.

These can be independently configured with and set to different voltage levels/fan speeds depending on how you want your internal cooling system to be set up.

As mentioned, it’s best to make sure that your CPU cooler has a connection to the CPU_FAN header.

Besides this though, if you have multiple fans from your CPU cooler which require multiple headers in order to power, the remaining fans/power cables can be connected to the CPU_OPT header, either just with a single connecting cable or via a splitter which will enable multiple fans to be powered via the CPU_OPT.